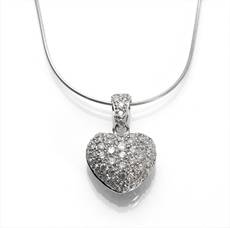 Argent purchases diamonds from ligitimate sources not involved in funding conflict in compliance with United Nations Resolutions.  We confirm that the diamonds we use in our products are conflict free based on personal knowledge and/or undertakings supplied by our supplier.

Diamond is a carbon. Because it is so hard and disperses light so well it is ideal for industrial applications as well as jewellery. It is the hardest known naturally occurring mineral in the world.

The name diamond is derived from theancient Greek adámas, meaning "unbreakable, untamed".  Diamonds have been treasured as gemstones since their use as religious icons in ancient India.  Their usage in engraving tools also dates to early human history. The popularity of diamonds has risen since the 19th century because of increased supply, improved cutting and polishing techniques, growth in the world economy, and innovative and successful advertising campaigns.

Diamonds are assessed by the “four Cs”: carat, clarity, colour, and cut. These characteristics are used universally to value diamonds. Each ‘C’ is of equal importance in terms of assessing a stone’s beauty.  Lustre, brilliance and the beauty of the diamond depend upon all the factors together.

Roughly 49% of diamonds originate from central and southern Africa, although significant sources of the mineral have been discovered in Canada, India, Russia, Brazil, and Australia. The mining and distribution of natural diamonds are subjects of frequent controversy such as concerns over the sale of conflict diamonds or blood diamonds by African paramilitary groups. Reputable, professional jewellers do not use diamonds from these sources.

Diamond is the hardest natural material known, where hardness is defined as resistance to scratching.

The hardest diamonds in the world are from New South Wales, Australia. They were called 'can-ni-fare' (cannot be cut) by the cutters in Antwerp, when they started to arrive in quantity, from Australia in the 1870's. These diamonds are generally small, perfect to semiperfect octahedra, and are used to polish other diamonds.

The hardness of diamonds contributes to its suitability as a gemstone. Because it can only be scratched by other diamonds, it maintains its polish extremely well. Unlike many other gems, it is well-suited to daily wear because of its resistance to scratching—perhaps contributing to its popularity as the preferred gem in engagement or wedding rings, which are often worn every day.

The cut of a diamond refers to the diamond’s proportions and is arguably the most important of the four ‘Cs’.  The angles and finish is what enables the diamond to reflect light and thus give the stone its brilliance.  The better the cut, the more light is reflected back and thus more brilliance can be observed.  The skill of the cutter is paramount in delivering this.  The most popular shapes of diamond are round, emerald (rectangular) and princess (square).

The colour of a diamond is represented by a letter of the alphabet starting with the letter D.  A colourless diamond (D) allows more light to pass through and thus creates more brilliance.  Diamonds with no colour are very rare and expensive.  The more universal colour range used in jewellery is between G and L.  Colour differences are very subtle and it is therefore very difficult to see the distinction between an F and a G other than by an expert or using carbon spectrometry.

Gem quality diamond may be colourless or occur in any hue including the non-spectral hues of grey, brown and black. Diamond is the only gemstone composed of a single element, carbon. Nitrogen is the smallest and by far the most common impurity found in gem diamonds. Nitrogen is responsible for the yellow and brown in diamonds. Boron is responsible for the grey blue colours. Colour in diamond has two additional sources: irradiation (usually by alpha particles), that causes the colour in green diamonds; and physical deformation of the diamond crystal known as plastic deformation. Plastic deformation is the cause of colour in some brown and perhaps pink and red diamonds. In order of rarity, colourless diamond, by far the most common, is followed by blue, green, black, translucent white, pink, violet, orange, purple and red, though yellow and brown are by far the most common colours. "Black" diamonds are not truly black, but rather contain numerous dark inclusions that give the gems their dark appearance. Coloured diamonds contain impurities or structural defects that cause the colouration, while pure or nearly pure diamonds are transparent and colourless.

In 2008, the Wittelscach Diamond, a 35.56 carat blue diamond once belonging to the King of Spain, fetched over $24M at a Christie's auction. The blue hue was a result of trace amounts of boron in the stone's crystal structure.

Clarity refers to the degree of imperfections, referred to as inclusions that a diamond contains.  Internally flawless diamonds are extremely rare and thus expensive.  The clarity scale of diamonds is as follows;

Carat refers to the weight of the gem.  The word carat is derived from word carob.  One carob seed, or carat, weighed approximately 200 milligrams, ie 0.2 grams.

The word carat is derived from the Greek kerátion, “fruit of the carob”, via Arabic qira. Carob seeds were used by ancient Egyptians as weights on precision scales because of their reputation for having a uniform weight.