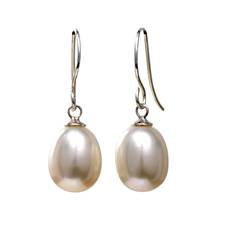 Pearls used by Argent of London (www.argentlondon.com) are normally the cultured freshwater pearl variety. Occasionally we use natural sea pearls, in which case they are described as such. Pearls should never be in direct contact with perfume or chemicals. Body creams and perspiration also may affect pearls and stones. We recommend that pearls are cleaned professionally. When not in use we recommend that pearls are kept carefully in a velvet pouch. Pearls should be restrung on a regular basis, if appropriate. As a product of nature pearls are rarely perfectly blemish free.  It is normal to find striations and other slight marks.

Pearls are a product of nature and one of the oldest gems, if not the oldest, known to man.  Their beauty is principally in their unique iridescence.  Whether occurring naturally or in cultured form, a pearl will literally ‘glow’ on the wearer.  This is a result of light being reflected from the surface, or nacre, of the pearl.

Cultured pearls, although stimulated and aided to start their existence, thereafter grow completely independently.  Humans have no control over their eventual size, shape and colour, or even whether they survive. Each pearl whether cultured or natural is truly individual.

Pearls are a timeless symbol of style. Down the centuries pearls have played a central role in fashion and refinement. They have been favoured by many style leaders such as Cleopatra, Theodora, Mary Tudor, Queen Elizabeth I, Mary Queen of Scots, Catherine the Great of Russia, Queen Mary, Queen Victoria, Princess Alexandra, Coco Chanel, Elizabeth Taylor, Audrey Hepburn, Marilyn Monroe and most recently the late Princess Diana, Caroline of Monaco, Hilary Clinton and Grace Jones.

Pearls are created by a protective reaction of an ‘oyster’ or mussel to the accidental or deliberate introduction of a foreign body into its organism. This reaction creates concentric layers of nacre, which surround the intruding piece of 'grit' and this nacre slowly forms the pearl, layer by layer.

Essentially Nacre is tiny crystals of calcium carbonate, held together with a glue-like protein called Conchiolin.

Nacre grows not only on pearls but also as mother of pearl on the interior of the shell. The only difference between pearls and mother of pearl is that in a pearl the layers are concentric and in mother of pearl they are straight.  In all other respects the composition is the same.

Nacre layers play a vital role in the lustre of a pearl. Nacre layers are very thin.  They are also translucent and reflect light. This creates a pearl’s distinctive iridescent lustre. Generally the thicker the nacre with regular, thin and transparent layers, the finer the lustre will be on the pearl. In other words, lustre is caused by the reflection on the surface of the pearl and the passage of light through the layers of nacre that appear to make the pearl glow from within. Because of their delicacy pearls need to be treated with great care.

China is the major producer of cultured freshwater pearls.

Externally there is no difference between a natural and cultured pearl. The principal difference arises from the fact that one is formed entirely accidentally, without any intervention from humans, while a cultured pearl is started by the introduction of an irritant by man.  The process of developing the pearl is identical and continued solely by the metabolism of the living mollusc.

The term natural pearl implies that it is formed accidentally without any human intervention.  Unless a pearl is natural it has to be described as Cultured Freshwater.

A Keshi pearl is a non-beaded pearl that has been formed by accident as a by-product of a pearl culturing operation.

Keshi pearls are formed when the oyster rejects and spits out the implanted nucleus before the culturing process is complete, or the implanted mantle tissue fractures and forms separate pearl sacs without nuclei. These pearl sacs eventually produce pearls without a nucleus.

Keshi may form in either saltwater or freshwater pearls. They are generally small in size and, because there was no nucleus to guide the ultimate shaping of the pearl, their shapes vary widely. Keshi come in a wide variety of colours.

Because the oyster has expelled the implanted nucleus of the pearl, the resulting keshi pearl is 100% nacre. This gives it an especially lustrous and shimmering surface quality. Most keshi, in fact, have a greater luster than even the highest quality cultured pearls.