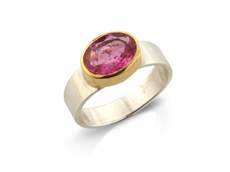 Tourmalines are gems with a huge variety of colours. According to an ancient Egyptian legend, tourmaline, on its long journey up from the centre of the Earth, passed over a rainbow. In doing so, it assumed all the colours of the rainbow. And that is why it is still referred to as the 'gemstone of the rainbow' today. Modern Greeks refer to tourmaline as ‘water melon’ since it resembles the green outside of the fruit turning to red in the inside.

The name tourmaline comes from the Singhalese words 'tura mali'. In translation, this means something like 'stone with mixed colours', referring to the colour spectrum of this gemstone, which outdoes that of all other precious stones. There are tourmalines from red to green and from blue to yellow. They often have two or more colours. There are tourmalines which change their colour when the light changes from daylight to artificial light, and some show the light effect of a cat's eye. No two tourmalines are exactly alike. This gemstone has an endless number of faces, and for that reason it suits all moods. No wonder that magical powers have been attributed to it since ancient times. In particular, it is the gemstone of love and of friendship, and is said to render them firm and long-lasting.

Different colour tourmalines are known sometimes by different names, for example a tourmaline of an intense red is known as a 'rubellite', but only if it continues to display the same fine ruby red in artificial light as it did in daylight. If the colour changes when the light source does, the stone is called a pink or shocking pink tourmaline. Blue tourmalines are known as 'indigolites', yellowish-brown to dark brown ones as 'dravites' and black ones as 'schorl'. The last mentioned, mostly used for engravings and in esotericism, is said to have special powers with which people can be protected from harmful radiation.

A popular variety is the green Tourmaline, known as a 'verdelite'. However, if its fine emerald-like green is caused by tiny traces of chrome, it is referred to as a 'chrome tourmaline'. The absolute highlight among the tourmalines is the 'Paraiba tourmaline', a gemstone of an intense blue to blue-green which was not discovered until 1987 in a mine in the Brazilian state of Paraiba. In good qualities, these gemstones are much sought-after treasures today. Since tourmalines from Malawi with a vivid yellow colour, known as 'canary tourmalines', came into the trade, the colour yellow, which was previously very scarce indeed, has been very well represented in the endless spectrum of colours boasted by the 'gemstone of the rainbow'.

Tourmalines are found almost all over the world. There are major deposits in Brazil, Sri Lanka and South and south-west Africa. Other finds have been made in Nigeria, Zimbabwe, Kenya, Tanzania, Mozambique, Madagascar, Pakistan and Afghanistan. Tourmalines are also found in the USA, mainly in California and Maine. Although there are plenty of gemstone deposits which contain tourmalines, good qualities and fine colours are not often discovered among them. For this reason, the price spectrum of the tourmaline is almost as broad as that of its colour.

In gemmology, the tourmaline is very special. Its high availability and its glorious, incomparable colour spectrum make it one of our most popular gemstones - and apart from that, almost every tourmaline is unique.

According to gem lore, tourmaline is considered to be an energizing, soul-searching, and tension releasing gemstone.