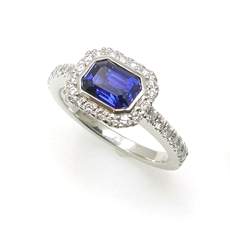 In earlier times, some people believed that the firmament was an enormous blue sapphire in which the Earth was embedded. Could there be a more apt image to describe the beauty of an immaculate sapphire? And yet this gem comes not in one but in all the blue shades of that firmament, from the deep blue of the evening sky to the shining mid-blue of a lovely summer's day which casts its spell over us. However, this magnificent gemstone also comes in many other colours: not only in the transparent greyish-blue of a distant horizon but also in the gloriously colourful play of light in a sunset – in yellow, pink, orange and purple. Sapphires really are gems of the sky, although they are found in the hard ground of our 'blue planet'.

Blue is the main colour of the sapphire. Blue is also the favourite colour of half the population. We associate this colour, strongly linked to the sapphire as it is, with feelings of sympathy and harmony, friendship and loyalty: feelings which belong to qualities that prove their worth in the long term – feelings in which it is not so much effervescent passion that is to the fore, but rather composure, mutual understanding and indestructible trust. Thus the blue of the sapphire has become a colour which fits in with everything that is constant and reliable. That is one of the reasons why women in many countries wish for a sapphire ring on their engagement. The sapphire symbolises loyalty, but at the same time it gives expression to people's love and longing. Perhaps the most famous example of this blue is to be found in music, in George Gershwin's "Rhapsody in Blue". And the blue of the sapphire even appears where nothing at all counts except clear-sightedness and concentrated mental effort. The first computer which succeeded in defeating a world chess champion bore the remarkable name 'Deep Blue'.

Its beauty, its magnificent colours, its transparency, but also its constancy and durability are qualities associated with this gemstone by gemstone lovers and specialists alike. The sapphire belongs to the corundum group, the members of which are characterised by their excellent hardness (9 on the Mohs scale). Indeed their hardness is exceeded only by that of the diamond – and the diamond is the hardest mineral on Earth! Thanks to that hardness, sapphires are easy to look after, requiring no more than the usual care on the part of the wearer.

The gemstones in the corundum group consist of pure aluminium oxide which crystallised into wonderful gemstones a long time ago as a result of pressure and heat at a great depth. The presence of small amounts of other elements, especially iron and chrome, are responsible for the colouring, turning a crystal that was basically white into a blue, red, yellow, pink or greenish sapphire. However, this does not mean that every corundum is also a sapphire. For centuries there were differences of opinion among the specialists as to which stones deserved to be called sapphires. Finally, it was agreed that the ruby-red ones, coloured by chrome, should be called 'rubies' and all those which were not ruby-red 'sapphires'.

If there is talk of the sapphire, most gemstone aficionados think immediately of a velvety blue. It's a versatile colour that becomes many wearers. A blue sapphire fits in best with a well balanced lifestyle in which reliability and temperament run together and there is always a readiness to encounter things new – as with the woman who wears it. The fact that this magnificent gemstone also comes in a large number of other colours was known for a long time almost only to experts. In the trade, sapphires which are not blue are referred to as 'fancies'. In order to make it easier to differentiate between them, they are referred to not only by their gemstone name but also by a description of their colour. In other words, fancy sapphires are described as yellow, purple, pink, green or white sapphires.  Fancy sapphires are pure individualism and are just made for lovers of individualistic coloured stone jewellery. They are currently available in a positively enchanting variety of designs - as ring stones, necklace pendants or ear jewellery, as solitaires, strung elegantly together or as sparkling pavée.

Depending on where they were found, the colour intensity and hue of the cut stones vary.

Specialists and connoisseurs regard the Kashmir colour with its velvety shine as the most beautiful and most valuable blue. These magnificent gemstones from Kashmir, found in 1880 after a landslide at an altitude of 16,000 feet and mined intensively over a period of eight years, were to have a lasting influence on people's idea of the colour of a first-class sapphire. Typical of the Kashmir colour is a pure, intense blue with a very subtle violet undertone. It is said that this hue does not change in artificial light. But the Burmese colour is also regarded as particularly valuable. It ranges from a rich, full royal blue to a deep cornflower blue.

The oldest sapphire finds are in Sri Lanka. There, people were already digging for gemstones in ancient times. The specialist recognises Ceylon sapphires by the luminosity of their light to mid-blue colours. The majority of blue sapphires come either from Australia or from Thailand.