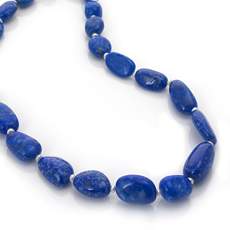 Lapis lazuli is a gemstone of the kind that might have come straight out of the Arabian Nights: a deep blue with golden inclusions of pyrites that shimmer like tiny stars.

This opaque, deep blue gemstone has a grand past. It was among the first gemstones to be worn as jewellery and worked on. At excavations in the ancient centres of culture around the Mediterranean, archaeologists have again and again found among the grave furnishings decorative chains and figures made of lapis lazuli – clear indications that the deep blue stone was already popular thousands of years ago among the people of Mesopotamia, Egypt, Persia, Greece and Rome. It is said that the legendary city of Ur on the Euphrates plied a keen lapis lazuli trade as long ago as the fourth millennium B.C., the material coming to the land of the two great rivers from the famous deposits in Afghanistan. In other cultures, lapis lazuli was regarded as a holy stone. Particularly in the Middle East, it was thought to have magical powers. Countless signet rings, scarabs and figures were wrought from the blue stone which Alexander the Great brought to Europe. There, the colour was referred to as 'ultramarine', which means something like 'from beyond the sea'.

The name is composed from 'lapis', the Latin word for stone, and 'azula', which comes from the Arabic and means blue. The value of this stone to the world of art is immeasurable, for the ultramarine of the Old Masters is nothing other than genuine lapis lazuli. Ground up into a powder and stirred up together with binding-agents, the marble-like gemstone can be used to manufacture radiant blue watercolours, tempera or oil-paints. Before the year 1834, when it became possible to produce this colour synthetically, the only ultramarine available was that valuable substance made from genuine lapis lazuli that shines out at us from many works of art today. Many pictures of the Madonna, for example, were created using this paint. But in those days, ultramarine blue was not only precious and so intense that its radiance outshone all other colours; it was also very expensive. But unlike all other blue pigments, which tend to pale in the light, it has lost none of its radiance to this very day. Nowadays, the blue pigment obtained from lapis lazuli is mainly used in restoration work and by collectors of historical paints.

Lapis lazuli is regarded by many people around the world as the stone of friendship and truth. The blue stone is said to encourage harmony in relationships and help its wearer to be authentic and give his or her opinion openly.

Uncut lapis lazuli is matt and of a deep, dark blue colour, often with golden inclusions and whitish marble veins. These small inclusions with their golden shimmer, give the stone the magic of a starry sky, are not of gold as people used to think, but of pyrites. Their cause is iron. The blue colour comes from the sulphur content of the lazurite and may range from pure ultramarine to a lighter blue. At between 5 and 6 on the Mohs scale, this stone is among the less hard gemstones.

As they did more than 5000 years ago, the best raw stones still come from the steep Hindu Kush in the north-east of Afghanistan. The lumps of blue rock, extracted from the inhospitable mountains by blasting, are brought down into the valley in the summer months by mules. Nature also created deposits in Russia, to the west of Lake Baikal, and in the Chilean Andes, where the blue rock often has white or grey lime running through it. In smaller amounts, lapis lazuli is also found in Italy, Mongolia, the USA and Canada, Myanmar and Pakistan, but in really good qualities it is rare all over. That is why the prices of jewellery with lapis lazuli vary very widely, from luxurious to quite inexpensive. The prices of this gemstone are largely dependent on the beauty and intensity of the colour. The most popular is an intense, deep blue.