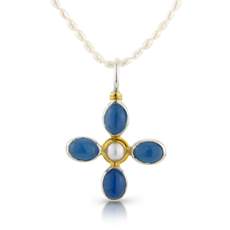 Chalcedony is an umbrella term for a specific variety of quartz which comes in an assortment of sizes and colors. As a general rule, chalcedony is translucent to semi-transparent, and often has a milky or obscured color. It takes well to polish, and some varieties of chalcedony seem to glow from within after prolonged polishing. The stone is typically classified by color, as chemically all chalcedony is identical. Popular examples of chalcedony including carnelian, agate, bloodstone, flint, and jasper, among many other stones.

The structure of chalcedony is classified as microcrystalline, meaning that the structure of the rock is so fine that it is not readily visible to the naked eye. This makes the stone relatively durable and easy to work with as well as having the advantage of being far less prone to fracturing that other forms of quartz or minerals with larger crystal structures.

Chalcedony typically forms over a long period of time.  The colors are caused by trace amounts of other impurities in the silicon dioxide. Pure chalcedony without any trace minerals, often called milky quartz, is also found in some regions. Some types of chalcedony are more rare or sought after than other, causing costs to vary widely depending on the variety and the current market.

Examples of chalcedony can be found all over the world, although some regions are better known than others for the production of high quality chalcedony. The stone has been used for centuries in decorative art and jewellery, and often appears in the form of carved cameos, beads, or simple stone settings on rings, necklaces, and bracelets. Many societies associated particular traits with certain varieties of chalcedony, and many religious icons and symbols such as crosses, worry beads, and ornaments are made in chalcedony.

Chalcedony is said to symbolise calmness and composure, and for the Tibetans is a stone of purity, concentration and internalisation of the essential. The name is said to have come from the city where it was discovered: Chalcedon on the Bosphorus. It was quite a popular decorative stone in antiquity, when it was carved with motifs of the air and water deities and water sprites. This was done as the stone is associated with the weather and helps deal with disorders caused by it.