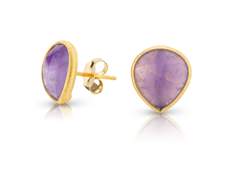 The colour of amethyst is as unique as it is seductive. Amethyst is said to protect its wearer against seduction. The stone has an intense violet hue. For many thousands of years, the most striking representative of the quartz family has been a jewel coveted by princes both ecclesiastical and secular. Moses described it as a symbol of the Spirit of God in the official robes of the High Priest of the Jews, and the Russian Empress Catherine the Great sent thousands of miners into the Urals to look for it. In popular belief, the amethyst offers protection against drunkenness - for the Greek 'amethystos' means 'not intoxicated' in translation. A more appropriate stone for the month of February, particularly if there is to be plenty going on in the way of carnival celebrations, could thus hardly be wished for.

A large number of further miraculous powers are attributed to amethyst in various cultures. It has been said to protect crops against tempests and locusts, bring good fortune in war and in the hunt, drive out evil spirits and inspire the intellect. Pliny professed that amethyst, if worn round the neck on a cord made from dog's hair, offered protection against snakebite. Generally, gemstone therapists say that the amethyst has a sobering and cleansing effect. Amethyst has also been said to quell excessive stomach acid and, according to Hildegard von Bingen, served to combat insect bites and beautify the skin. But amethyst not only had a firm niche in medicine; it was also highly regarded as a stone of friendship. And since it was thought to put the wearer in a chaste frame of mind and symbolise trust and piety, the amethyst came to occupy a very prominent position in the ornaments of the Catholic clergy over the centuries. It was the stone of bishops and cardinals; we find it in prelates' crosses and in the so-called Papal Ring (Italian, 15th century) in the Jewellery Museum in Pforzheim.

Amethyst, the most beautiful of all crystal quartzes, poses riddles for the scientists. Many remain to be solved to this day. The amethyst has its hardness (7), its moderate refraction and its weight in common with the other quartzes, but the crystal structure is different, and most unconventional. The construction is stratified, as a result of which areas and lamellae of varying colour intensity often come about. This explains why there are relatively few large cut amethysts of an evenly distributed dark colour, in spite of it being found so abundantly throughout the world. It is only in the last few years that scientists have been fairly certain of having found the real cause of the colour. It is now attributed to certain iron constituents in connection with natural radioactive radiation.

The greatest deposits are found in southern Brazil and in neighbouring Uruguay. The other major source is Madagascar. However, this gemstone is spread all over the world. Good specimens were found in Aztec graves, though the deposits from which they were extracted are no longer known today. On the Canadian side of Lake Superior in North America, there is a place named Amethyst Harbor. The violet quartz is found there in ample quantities, though rarely in gemstone quality.

The South American deposits in particular, which were not discovered until the nineteenth century, brought down the price of the violet gemstone. The amethyst bracelet of Queen Charlotte of England, which was so famous at the beginning of the 18th century, its value being estimated at 2000 pounds sterling at that time, was apparently worth only 100 pounds 200 years later. However, the price has a close relationship with the quality, and the quality varies immensely. Most of the material from Brazil is light-coloured, a tender purple. In Madagascar, it is generally red or violet hues that are found. Uruguay supplies the most beautiful and the deepest colour, but it is mostly blemished.